Our Favorite Moments From The Open Data Science Conference

On Friday May 20th I had the opportunity to attend the fantastic Open Data Science Conference East in Boston. The weekend was really a mix of several data themed conferences including Big Data Science, Data Science for Good, and Data Visualization, among others. There were enlightening sessions and workshops, fun parties, and some wicked smaht people. I had conversations with folks from the White House, Spotify, AWS, RStudio, and plenty more! Here are my highlights from the weekend 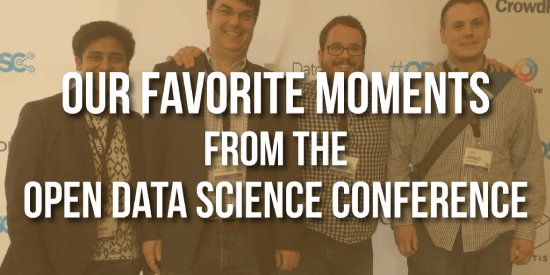 Did you know the U.S. Census Bureau joined us in the 21st century? Neither did I! Alexandra started the talk off by pointing out that they’re actively developing an open API, how they’re on GitHub, and even have Python and R libraries. Then Jeff led us through a few exercises with the first using the American Community Survey API and CartoDB to identify the gender gap for computer science workers in Texas and the second used R to create choropleth maps examining the economic impact of Fracking in North Dakota. You can find the exercises on the Jeff's GitHub if you want to try them out yourself!

Kirk spoke early Saturday during the main keynote. The audience could tell he had a lot more to say than his time frame allowed, and I knew I had to hear more. I arrived 30 minutes early for this session and it was worth it! Kirk was entertaining, informative, and inspiring. He covered a ton in his 90 minute talk including different generations of predictive analytics, Mars rovers, solar flares, the future of data storage, and last but not least data science and social good. His talk wrapped up with a mention of the National Data Science Bowl and how they're looking for a challenge/topic in 2017!

CrowdFlower is filling in the missing parts of machine learning: the human element. It’s a crowdsourced platform for mechanical turk that provides shortcuts for the boring job of developing rich data, or even a place to offload that 10% of uncertainty in your algorithm. We can't wait to find a way to use it here at Arkatechture!

There were three sessions that were either full or I didn’t know about until it was too late. They were “Machine Learning for Everyone” with Dhiana Deva, “Chatbots and Hybrid Intelligence” with Manuel Ebert, and “Data for Good” with Patricia Boyle-McKenna. I heard exciting things about all three. Luckily ODSC will be publishing recordings and slide decks so I can go back and find out what I missed.

I give the Open Data Science Conference four out of five stars. Overall it was great, but it suffered from some overbooking and a less than perfect mobile app. I would definitely recommend going in 2017, and if you do, come say hi to the guy on the Segway!

Did you attend ODSC? Leave a comment below and let me know what you thought of the conference!